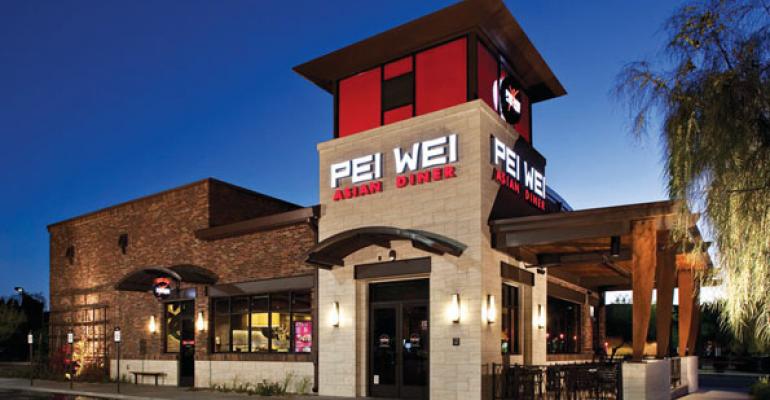 The “Wei Better” campaign will include radio advertising, outdoor and digital advertising and emphasize the brand’s “refresh” campaign of the past year, as well as recent additions to its menu, said Chris Tebben, vice president of marketing at the 192-unit fast-casual division of Scottsdale, Ariz.-based P.F. Chang’s China Bistro Inc.

“It builds the word play on our brand name,” Tebben said in an interview Tuesday, “but we think it has legs to play in the near term to talk about how it differentiates us, whether its brand messaging or the twists on the products we are launching.”

Next week’s advertising debut will highlight the sushi and smaller-sized entrée salads that were introduced last week.

In addition, the company is testing new menu categories that may show up later in promotions under the same banner, Tebben said.

“We think it’s a really bold take on a sandwich-replacement item,” Tebbler said.

“We think we have broad appeal across protein types, and they are wrapped in a whole-wheat flatbread,” Tebben said. “That’s a push toward particularly the lunch occasion.”

The menu evolution and brand refresh initiative have come in the wake of Centerbridge Partners L.P., the New York-based private-equity firm, acquiring its parent, P.F. Chang’s China Bistro Inc., in a $1.1 billion deal completed in July 2012.

“In the eight- to 12-month-period thereafter,” Tebben said, “we were doing an awful lot of work after being acquired by Centerbridge just identifying the things within the business that would continue to move us forward.”

The recent sushi introduction, for example, has produced good results, and check averages have been maintained, Tebben said.

Pei Wei chef Phil Butler said the two sushi offerings, priced at $3.29 for four rolls or $5.99 for eight, feature Pei Wei twists on the favorites, such as replacing the avocado in the California roll with mango and adding a Sriracha aioli to the tuna roll.

Butler added that the sushi has fit in well with the variety of portion sizes Pei Wei is offering in its entrees and salads, and provides guests with an accessible add-on.

“It’s a good entry point: familiar but unique,” Butler said. “We’re seeing a lot of people coming in and ordering a small plate rather than sharing a large plate, and then they add items to create their own experience.”

Tebben said much of the brand refresh, which was launched systemwide in January, is to make Pei Wei more of what he called a “lifestyle” brand.

“We want to customers to realize there are a whole lot of customization options for them,” Tebben said. “Some customers, but not all, are aware of the range of vegetarian and gluten-free options we have. You can steam your protein, which cuts calories. We have options in rice, brown and white.”

Butler and Tebben said the culinary team has worked closely with the company’s training division to streamline the unit operations, which now include making the sushi in house, and speed up service in general.

“We want to become even more relevant for quick occasions,” Tebben said. “What consumers tell us is that they come to us for the strong value-to-money equation. We felt there was an opportunity for to-go lunch and quick dine-in lunch.”

A significant amount of Pei Wei’s sales continue to be in the to-go business, Tebben said, and the company is working to make that ordering process easier for the guest.

“We’re seeing a shift toward online ordering and mobile ordering,” he said. “We want drive that with our guests. It’s a more seamless experience.”

Tebben said Pei Wei’s aim is to position itself as an “everyday, affordable brand” for both the lunch and dinner dayparts.

To do that, he concluded, “You have to lean in on the belief that providing choice and, in this case, portion-size choice, is the right thing to do. It’s going to drive frequency into the business.”