Harland David Sanders, who founded Kentucky Fried Chicken in 1930, and was the brand’s longtime spokesman, died on Dec. 16, 1980, in Louisville, Ky. He was 90 years old.

Along with Darrell Hammond’s portrayal of Col. Sanders, KFC brought the legend to life in an interactive website called “The Hall of Colonels,” which was touted as “the Internet encyclopedia about the man behind the bucket.” The effort was part of KFC’s revitalization strategy with the theme “Make the Colonel Proud.”

In May 2015, 35 years after the original founder’s death, KFC resurrected Colonel Harland Sanders with “Saturday Night Live” comedian Darrell Hammond in a series of online and television ads. The legendary founder also starred in a comic book.

In time for the 2016 Super Bowl in February, KFC substituted Norm Macdonald with stand-up comedian Jim Gaffigan as the Colonel. A 30-second ad featured the “real” Colonel Sanders, portrayed by Gaffigan, waking from a nightmare in which Macdonald had stolen his identity.

KFC is starting to have more colonels than an ear of corn.

The latest in a series of Colonel Sanders portrayers will debut this weekend when actor George Hamilton becomes the latest personality to slip into the Colonel’s white suit. Hamilton is the first colonel to focus on only one product, KFC’s Extra Crispy Chicken.

A string of celebrities have played KFC founder Colonel Harland Sanders since May 2015, including Darrell Hammond, Norm Macdonald and Jim Gaffigan.

“Just like no one person could play the Colonel, no one Colonel can sell both Original Recipe and Extra Crispy fried chicken,” said Kevin Hochman, KFC U.S. chief marketing officer, in a statement. "And no actor was more qualified to play our Extra Crispy Colonel than a very tan George Hamilton."

Hamilton added: “I like to think that I know a thing or two about being extra crispy. It didn’t take long for me to get into character as the Extra Crispy Colonel. One could argue that my entire career has been leading up to this role.”

The company statement noted that he said that last sentence “with a wink.”

The Hamilton campaign by Wieden+Kennedy will include four spots, comprised of two 30-second and two 15-second commercials, all of which will air nationally.

Louisville, Ky.-based KFC Corp. a division of Yum! Brands Inc., has more than 19,400 restaurants in 115 countries and territories.

Actor George Hamilton, known for his crisp tan, is KFC’s first Colonel to focus on one product, the chains Extra Crispy Chicken.

Billy Zane, film producer and actor in such movies as “Titanic” and “Dead Calm” and ABC television’s “Guilt,” was enlisted to introduce the Georgia Gold Honey Mustard BBQ Chicken, a limited-time offer that was to begin Jan. 30. 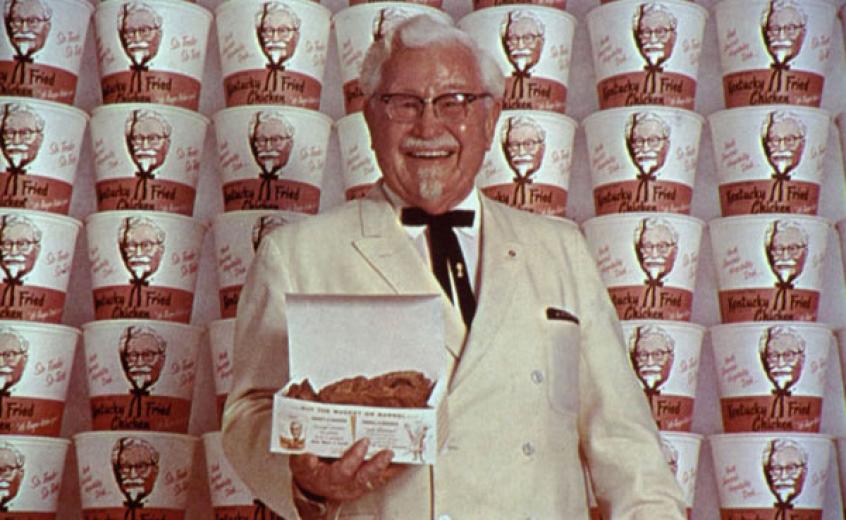