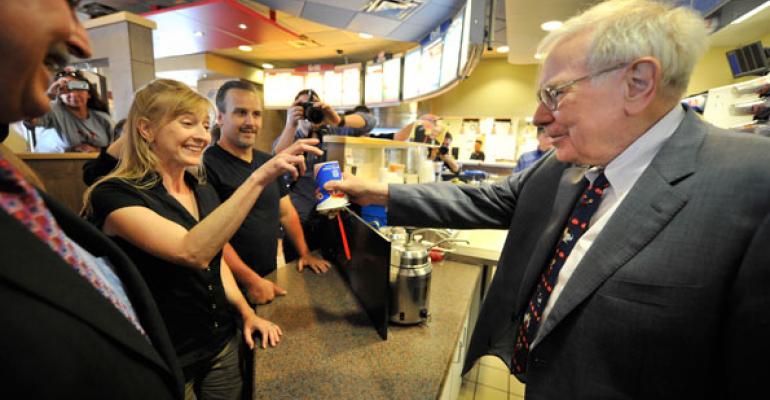 Theme of new advertisements is “Fan food, not fast food”

The new campaign is its first work with Barkley, the Kansas City, Mo.-based agency that won the Dairy Queen account in December after the Minneapolis-based restaurant chain parted ways with Grey New York after 15 years.

In the new spots, live-action footage of real Dairy Queen fans enjoying Dairy Queen food and soft serve will be interspersed with food photography meant to convey quality. The first 30-second spot features a new “brand anthem” in which people celebrate their connection to Dairy Queen.

“Consumers today are looking for much more authenticity in their relationships with brands that they’re loyal to,” Barry Westrum, executive vice president of marketing, said in an interview with Nation’s Restaurant News. “We’ve found the brand stands out relative to our competitors as it relates to that authenticity. Consumers grew up with our brand, or had their first kiss at one of our locations, or came here after winning Little League, and they don’t have that connection with our competitors. We wanted to bring that to life in our advertising.”

New TV commercials differ greatly from Dairy Queen’s previous work in the “Ri-DQ-lous” campaign that trended toward the quirky and absurd. “The previous work broke through the clutter with humor, and that works — for a time,” Westrum said. “Our consumers change, and we want to change with them.”

That does not necessarily mean that Dairy Queen’s core audience would shift dramatically toward younger, Millennial consumers, even though previous creative under Grey had a sense of humor that spoke mostly to a Generation X customer base, he said.

“There’s no question the heavier users of our category are younger, but we need to make sure we appeal to that group,” Westrum said. “This isn’t an overt attempt at going after Millennials. The thing that unites our consumers, no matter how old they are or where they’re from, is that they root for us and think we’re not a giant corporate entity like our competitors. Our locations sponsor the Little League team or hold the fundraiser for the school, and that’s the relationship we want to capture.”

A second commercial will promote the S’mores Blizzard, which will be the featured Blizzard of the month for June. In a separate media event, famous investor Warren Buffett served the first S’mores Blizzard at his favorite Dairy Queen location in Omaha, Neb. Dairy Queen is a holding of Buffett’s Berkshire Hathaway company.

“We’ll have a nice mix,” Westrum said, “with the emotion-laden stuff, another branch where fans speak directly to the camera and recruit other fans, and ads that tell a very specific product story about the S’mores Blizzard and other items.”

Commercials will be tagged with a new Twitter hash tag for the brand, #LOVEmyDQ.

Dairy Queen franchises a system of more than 6,300 locations in the United States, Canada and 20 other countries.