Concepts that award-winning execs are watching 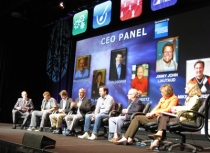 The Multi-Unit Foodservice Operators conference always finds executives with their ears to the ground and tastebuds on the fork of The Next Big Thing in restaurant ideas.

Award-Winning CEO panelists were asked to name a concept they looked up to — other than their own successful enterprise, of course.

The answers ranged far and wide, with the four-unit True Food Kitchen by Fox Restaurant Concepts of Scottsdale, Ariz., getting a chorus of mentions:

Cheryl Bachelder, chief executive of Popeyes Louisiana Kitchen, said she has her eye on the category of “new ethnic foods,” citing Bombay Bowl in Denver, Colo., for its Indian food and Zoes Kitchen of Birmingham, Ala., for its take on fast-casual Mediterranean cuisine. Those fit, Bachelder said, into “the opening up of America’s taste palates and the experiments that they are going to be willing to pursue.”

Jimmy John Liautaud, chief executive and founder of Jimmy Johns Ltd., said he was fond of several Sam Fox Restaurant Concepts such as North, Sauce and True Food Kitchen. They “are off the chart,” he said, adding that True Food Kitchen “is going to be some rockin’ stuff.”

Rick Federico, chief executive of P.F. Chang’s China Bistro, which is a financial partner of True Food Kitchen, said, “We love the positioning.” He also said he was a “huge fan” of Houston’s/Hillstone. “The simplicity of what they do, the level of excellence with which they do it and the consistency in which they do it over a long period of time is unparalleled in the casual-dining world,” Federico said.

John Cooper, president of Bonefish Grill, said he had an eye on Tender Greens of Los Angeles. He said it was “a great model for today” with a good labor structure and a “good-for-you” menu. He also “dittoed” the mentions of True Food Kitchen, which won a Nation’s Restaurant News Hot Concepts award in 2011.

Stan Sheetz, chief executive of Sheetz Inc., said he was a big fan of Quaker Steak & Lube of Sharon, Pa., which just passed 50 units. “To me, it’s down home. It’s about cars. It’s about greasy food. It’s about wings and sodium and, of course, beer,” Sheetz said. “I don’t think there’s anything more American than that.”

Mike Tattersfield, president and chief executive of Caribou Coffee, gave a shout-out to Punch Pizza of Minneapolis, Minn., and Roti Mediterranean Grill of Chicago. They represent, he said, good food and interesting experiences “I think Americans are opening themselves up to different flavor profiles as well,” he said.